The NFIB Small Business Optimism Index was unchanged in April, remaining at 93.2 and the fourth consecutive month below the 48-year average of 98. Small business owners expecting better business conditions over the next six months decreased one point to a net negative 50%, the lowest level recorded in the 48-year-old survey.  Inflation continues to be a problem for small businesses with 32% of small business owners reporting it’s their single most important problem in operating their business, the highest reading since the fourth quarter of 1980. Forty-seven percent of owners reported job openings that could not be filled, unchanged from March.

The Market Composite Index for mortgage applications increased 2.0 percent on a seasonally adjusted basis from one week earlier, with purchase loans rising 5 percent (but down 8 percent year-on-year) and refinance activity falling 2 percent (and down 72 percent year-on-year).  The average contract interest rate for 30-year fixed-rate mortgages increased to 5.53 percent from 5.36 percent. The share of ARMs increased to 11 percent of overall loans and to 19 percent by dollar volume. 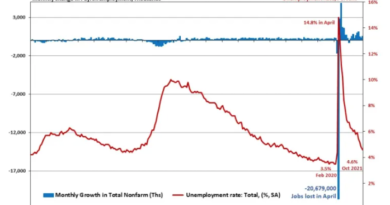