The Conference Board Leading Economic Index® (LEI) for the U.S. decreased by 0.3 percent in August 2022 to 116.2 (2016=100), after declining by 0.5 percent in July. The LEI fell 2.7 percent over the six-month period between February and August 2022, a reversal from its 1.7 percent growth over the previous six months. Among the index’s components, only initial unemployment claims and the yield spread contributed positively over the last six months—and the contribution of the yield spread has narrowed recently.

The Market Composite Index for mortgage applications increased 3.8 percent on a seasonally adjusted basis from one week earlier, with purchase loans rising 1 percent (but down 30 percent year-on-year) and refinance activity rising 10 percent (but down 83 percent year-on-year). The adjustable-rate mortgage (ARM) share of activity remained unchanged at 9.1 percent of total applications. The average contract interest rate for 30-year fixed-rate mortgages increased to 6.25 percent from 6.01 percent.

The Federal Reserve opted to raise its Federal Funds rate by 75 points to 3-3.25%, and reaffirmed its commitment to drive annual inflation down to 2.0% before halting further rate hikes which could hit 4.25% or more by the end of the year.

The magnitude of the hike was the same it imposed at each of the last two meetings. In addition, the Fed will continue reducing its holdings of Treasury securities and agency debt and agency mortgage-backed securities. 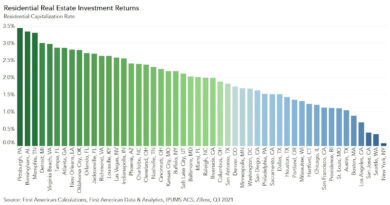 Where Can Residential Real Estate Investors Find the Most Potential ROI?

The Latest Trends on Home Design

How COVID Has Changed Home Design and Sales