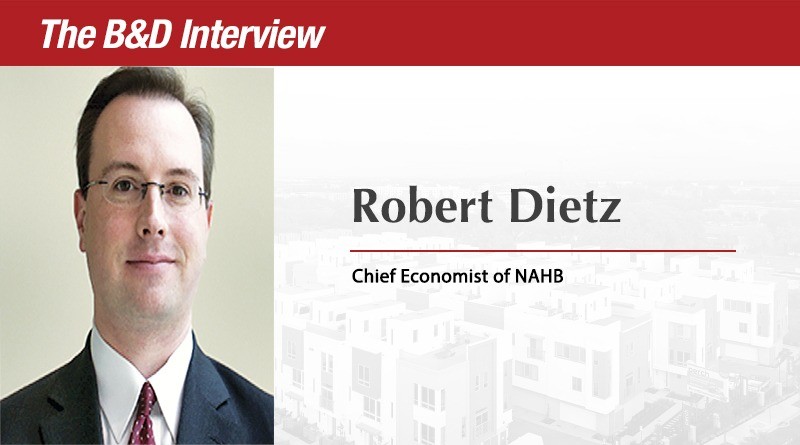 BD: What are your thoughts about the current homebuilding market?

Robert Dietz: Homebuilder confidence which we measure on the NAHB/Wells Fargo housing market index is at a record high. It’s from a zero to 100 point scale, and it’s at a level of 83. It hit a low of 30, back in the spring, so builder sentiment is really strong right now and it was driven by increases in buyer traffic. Clearly, buyer interest is being helped by lower interest rates, which reduce the cost of buying a home. But also, in the wake of the virus crisis, I think there’s a renewed focus on the importance of home. In some cases you have people trying to acquire additional space because you have people working at home and studying at home. That’s really supporting the remodeling market and the single-family new construction market.

The challenges are that the rebound has been so solid, and frankly above what we forecasted back in the spring, that the supply chains are strained. We’ve got real historic runoff at lumber prices. Lumber prices have increased more than 170% since mid-April, and we’re increasingly hearing from builders and remodelers that other kinds of building materials are in short supply.

Housing typically leads an economy out of recession, because buyers respond to those lower interest rates. The challenge is trying to deal with those supply chain issues and be able to meet the demand.

But the surprising thing is that the unemployment rate nationwide is still above 8%. So there’s a lot of economic disruption and frankly, distress in the marketplace, but the housing market is a bright spot for the economy. We’ve forecasted that that would be the case back in March and April.

Housing typically leads an economy out of recession, because buyers respond to those lower interest rates. The challenge is trying to deal with those supply chain issues and be able to meet the demand.

BD: In an article from a previous issue, you had said that the economic recovery was taking hold toward the end of 2020 and building momentum going into 2021. Now that we’re about three-quarters of the way into 2020, do you have any data regarding how 2021 will look?

RD: I think for GDP growth, we’re going have a solid year next year, we’re going to have growth, maybe a little less than 4% for the overall economy. It’s probably going to be until the fourth quarter of 2021 when GDP will get back to the level it was before we went into the recession, so it’s going to take about a two-year process.

Then for homebuilding, remodeling is growing. It will continue to grow through 2021. For single-family construction, we’re going to post the positive growth rate next year, it’s going get us to the post-Great Recession, a new high. I don’t think we’re going get to 1 million single-family starts for the year. We think, based on demographics, that 1.1-1.2 million single-family starts are what we’re ultimately going to grow to over the cycle. And that’s just based on household formation, growth, and the need to replace older homes and construct second homes. Basically what’s going to happen is in 2020, you get this really sharp decline, a quick rebound, and then we get back to the trend line that we were on in terms of single-family starts that we’ve been on since the Great Recession.

Housing is going to recover a lot faster and it’s just as good example of that. Residential construction, which is homebuilding and remodeling combined, gained about 27,000 jobs.

And I think sometime in the next month or two, say with October or November data, homebuilding will actually post a year over year gain in the size of our workforce, which was an 8% unemployment rate, and most sectors considerably down. The fact that our industry is going to be actually a position where we have added jobs really is an indication of housing being that bright spot.

The one area of weakness I think will be multi-family. We have the data this morning for August, multi-family permits so far in 2010 are down 8% year to date and that weakness will continue into 2021.

BD: Is there anything else that you would like to elaborate on, for instance, the incoming election?

RD: The election is obviously is going to have consequences, whether it’s tax policy or regulatory policy. I think often times there is a lot of attention at the presidential level and what happens to Congress, the state and local elections matter so much for real estate and I think one of the concerns going into 2021 will be a lot of local governments are going to be hurting for revenue.

It will be difficult for some of them to resist trying to take some of that revenue that they need from a bright spot in the economy which would be housing itself. Builders working through their local Builders Association and are going have to be on guard to make sure that those kinds of regulatory costs don’t go up in 2021. 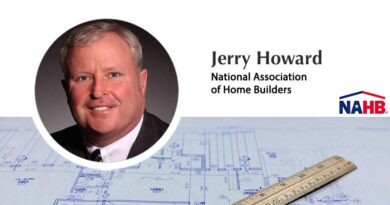 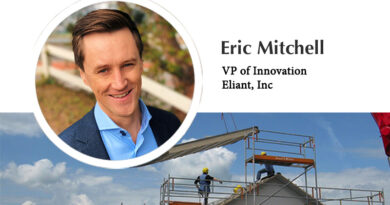 Exceeding Expectations When Delay is Inevitable 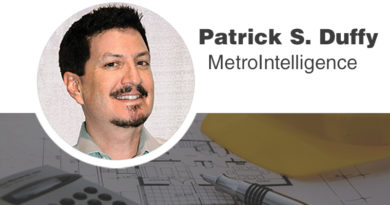