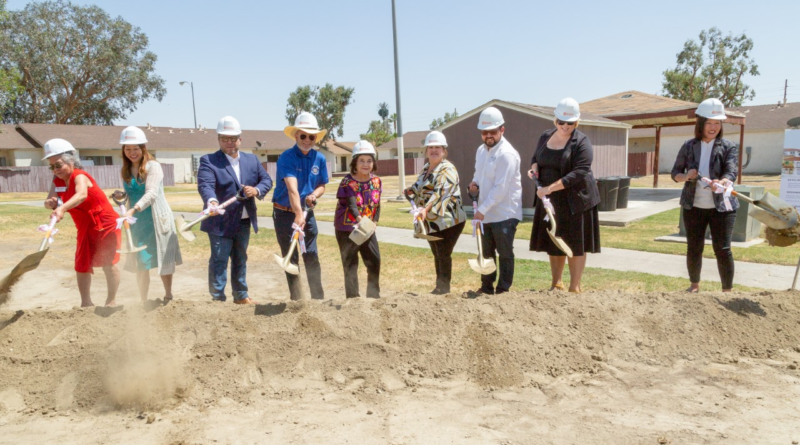 CHOC leaders, elected officials and more than 200 community members and admirers welcomed Dolores Huerta to the site of her namesake community, located at 84900 Bagdad Avenue in Coachella, for a formal dedication that celebrated the 92-year-old activist’s lifelong fight for social justice, fair labor, civil rights, and countless other social justice efforts.

Huerta’s work has impacted the lives of countless working people, particularly farmworkers and migrant laborers. Though Huerta was born in Dawson, NM, her victories on behalf of farmworkers and her profound impact on Mexican American families have been celebrated across the Americas and internationally for nearly 60 years.

“Señora Huerta’s fight for fair pay and better working conditions for farmworkers and migrant laborers has made her a role model for generations of Mexican Americans and immigrants. Her name will be a source of pride for generations of families who will make Placita Dolores Huerta their home,” said Joy Silver, CHOC’s Chief Strategy Officer. “We’re humbled that CHOC’s endeavors work in support of the movement Dolores started, and that her legacy is honored and represented here; CHOC is proud to continue fulfilling its mission, creating a sustainable housing situation for residents who call this community home.”

That legacy goes back to 1962, when Huerta and fellow activist Ceìsar Chaìvez led the effort to organize farm workers. They founded the National Farm Workers Association (NFWA), which preceded the formation of the United Farm Workers’ Union (UFW) in 1965. That same year, Huerta organized the Delano strike of 5,000 grape workers, an effort which halted the grape and wine industries, forcing employers to the bargaining table. Huerta was lead negotiator for an eventual contract that made substantial improvements to working conditions. Huerta served as UFW vice president until 1999.

“Señora Huerta defined the magnitude of leadership that is needed to not only fight for fairness and justice, but to actually achieve it. Through an uncompromising determination to organize and empower previously voiceless workers, she helped countless working families move closer to their dreams of providing a better life for the next generation. That is the same vision that drives the development of this community. CHOC is honored to support her legacy,” said CHOC Chief Executive Officer Manuela Silva.

The first phase of Placita Dolores Huerta will combine the demolition and ground-up construction of existing housing structures, scheduled to be completed by Fall of 2023. 110 one-, two- and three-bedroom residences will make up the community upon the completion of both phases. These units are financed to remain affordable for 55 years.

“It’s essential that we care for those who are feeding all of us. As a first-generation Mexican American son of farmworkers, my childhood was defined by frequent moving and fear of losing the roof over our heads. There is no doubt that stable housing is the foundation that provides security and stability for families to thrive and their children find opportunities for success. Without a safe home, those opportunities evaporate,” said Coachella Mayor Steve Hernandez. “I still see children trapped in this situation by bureaucracy and policy barriers to new development. CHOC’s vision proved that solutions are possible. Siì, se puede!”

“Siì, se puede,” which translates to “yes, we can,” and made famous by Huerta, illustrates what can be achieved together. These legendary words, which remain the motto of the UFW to this day, were meant to inspire farmworkers to organize. The phrase has transcended generations and aptly describes the vision, teamwork and determination that made the $38.3 million Placita Dolores Huerta community a reality.

CHOC recognized that it was indeed possible to create a sense of community and tradition that supports the next generation with opportunities and education, while remaining affordable. The project’s funding includes a $22.6 million grant from the California Tax Credit Allocation Committee (CTCAC), which oversees federal and state low-income housing tax credit programs. Much of the project’s remaining costs are funded by $1 million in Riverside County HOME Funds, a $3.8 million City of Coachella CFD loan and USDA Rural Development financing.

“The affordable housing shortfall is worsening and the speed and quality of new housing inventory is a problem we must solve. The complexity of CHOC’s vision and the innovative combination of funding should be applauded. This is exactly what this money is intended to do. This project will make a true difference in this community and showcase to the state what is possible,” added California Assemblymember Eduardo Garcia, who represents the 56th District where the project is located. “There is no question that this will make life better for all Coachella residents.”

Designed by Maria Song, AIA, LEED & AP, Principal with the Palm Springs-based architectural firm Interactive Design Corporation, the project shares many of the same design elements of the recently built Coachella Branch Library. Upon entering the property through two entrances that serve a two-way circular drive, the structures are designed in a Contemporary Spanish Colonial with Moorish details of smooth plaster siding, terra-cotta roofing, ceramic mosaics, tile-accented rounded arches, and decorative wrought iron. The architectural style and finishes will be seen throughout all residential buildings, the community building and landscape and are compatible with the character of the neighboring community.

Since its founding in 1984, CHOC has provided economically-integrated, affordable housing that has given pride to residents, stabilized families and improved local economies throughout California.

CHOC: Founded in 1984, the Community Housing Opportunities Corporation (CHOC) is a non-profit, affordable housing developer based in Fairfield, California with offices in Palm Springs, creating and managing communities for individuals, families, seniors and those with special needs. CHOC believes that economically-integrated, affordable housing is key to self-sufficiency and is achievable with enriching, supportive programs that give pride to residents, stabilize families and improve local economies. | chochousing.org

Eco-Friendly Prefab Houses to Your Doorstep